Reading today’s Gospel, I can’t help but re-imagine the first Christmas as if it were a cinematic experience. And because of this, I got to see a few details quite different from what I grew up to believe in and which led to questions that I can’t answer as I am not a Bible scholar. But I am sharing them anyway.

So let me begin with the image of the very pregnant Mary in Bethlehem with Joseph for the census. At this point in time, the book of Luke says that Mary was Joseph’s fiance or in other chosen words, his espoused wife. Growing up I thought they were married or at least, they married quickly after knowing she would be pregnant. So technically, Jesus was born out of wedlock. While Joseph’s promise to marry her was good enough for society back then, I wonder what the conversation between Mary and Joseph was like when they discussed the most appropriate time to get married. It seems to me that society then was pretty tolerant of pre-marital sex & pre-marital pregnancy (since everyone would have assumed they had, with Mary bulging) for as long as it was between two people promised to each other because if it weren’t these two would have been in trouble long ago. I don’t imagine them talking to everyone about angels and immaculate conception to justify the situation.

Moving on, let’s talk logistics. As the Gospel of Luke clarifies, Mary gave birth in a manger with her first born not because they can’t afford it but because every inn was fully booked. Remember it was census time and everyone was required to go back to their hometown. So naturally, rooms were hard to find. Why didn’t I notice that detail before? I think it was pretty dramatic of God to orchestrate a setting like this for Jesus’ entrance into the world. There must be some subliminal messaging happening here. So does this mean that Joseph, as traditionally presumed, is not necessarily poor? He is a descendant of King David but as we know it having a rich ancestor doesn’t guarantee that we too will be born rich. Joseph may not be rich but he is not that poor. While Jesus was wrapped in swaddling clothes or strips of cloth, it may have been a natural thing to do considering “hamog” and that they were out in the cold. Kapag nilalamig tayo nagpapatong-patong tayo ng damit hindi ba? So I re-imagine them putting together available clothes or blankets they have to keep Jesus warm. Again, not necessarily because they were dirt poor but they were traveling for the census and may not have expected her to give birth there. 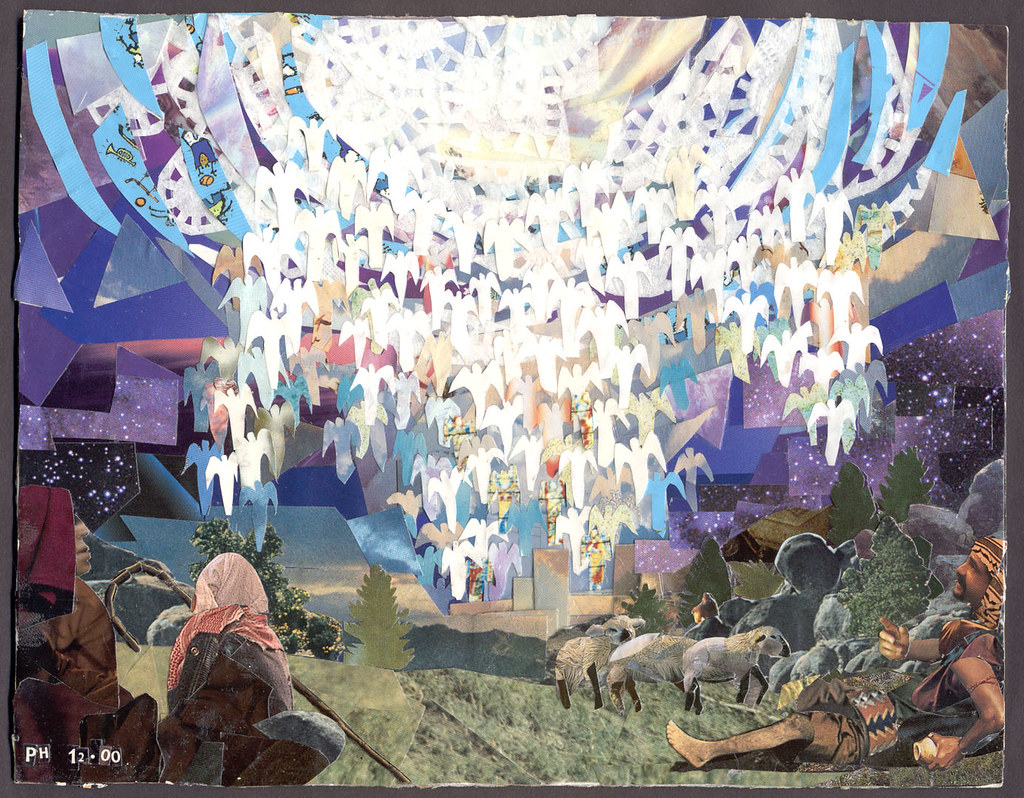 Does it matter that Jesus was born out of wedlock or that they may not be exactly poorest of the poor? Considering the bigger picture and the purpose of his coming, it isn’t as big a deal. At least to me. But it’s important to note that they didn’t live lives that are picture perfect and that God can work through a diverse set of circumstances – personal, economic, social or political. On the other hand, I find it fascinating and comforting that I can relate to someone like Jesus as I was born out of wedlock and He was able to accomplish His mission while making the most of His circumstances and available resources.

Let’s talk about angels and shepherds. The story of Christmas is filled with angels doing public relations work for God starting with announcements of pregnancy (Zechariah, Mary & Joseph); purpose of birth; appropriate naming of children; damage control with Joseph backing out of the marriage proposal and even up to the grand display of majesty through a magical performance of a choir of angels singing in the sky with lowly shepherds as their audience. Kung maka-shock factor naman kasi itong mga anghel eh, Wagas! Production number kung production number simula entrance. Pumili talaga sila ng mga shepherds na walang sakit sa puso noh?

I wonder what the criteria of heaven was in choosing these shepherds to be witnesses to this grandeur and to the Good News. To say they were blessed is an understatement. And I guess that’s the beauty of it, sometimes we are blessed not because we deserve it but because we are just shown favor from above. It must be mercy, it might be grace. Whatever we call it, whatever setting or economic condition we are in, we may be called to be witnesses or participants to the works of God. And the Bible is a testament to our Parent God’s work, let’s do as the shepherds did and speak about the wonders of his glory to everyone.

Finally, as we prepare for Noche Buena tonight and before we unwrap the gifts we give to each other, let’s take the time to reacquaint ourselves to the ultimate gift of love; to re-anchor our faith as Christians to the purpose of Jesus’ existence and to rededicate the whole celebration to our Parent God who authored Christmas in its essence. Yes, it’s not our birthday. It’s not our presents or about giving presents. It’s not about us, it’s about God.  Let’s not be sidetracked. And He/She deserves our praise, our greetings, our love, our thanks and our commitment to live our lives respecting His/Her love.

Dear Jesus, Happy Birthday. It’s all about you. Thank you for setting an example, for teaching, for healing and for saving us. Amen.