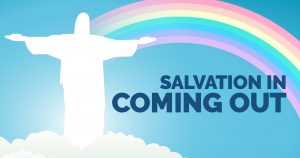 Our coming out like that of Jesus is not a onetime event. It will be a series and a lifetime indeed of coming outs, crucifixions, resurrections, empty tombs and expelling demons who know our true selves as children of God.

Coming out is not alien to Jesus. The greatest story ever told, so they say, was when Jesus came out of the tomb.

Many times in the gospel narratives there was some form of coming out by Jesus either by his own volition or by unwanted circumstance. Jesus repeatedly came out and was outed by people and even by spirits.

Jesus was outed first as a baby to shepherds and magi from the East. He then came out to a relative, John the Baptist as he was being baptized by him in the Jordan river. Not only him but the Holy Spirit came out of the heavens being torn apart. Jesus came out by his display of healing powers and more so when he calmed the storm or walked on water like some model on a fashion ramp. He came out to his 3 most trusted friends with the glitz and glamour of the transfiguration. Sometimes, Jesus was also outed by those demons and evil spirits that he would expel. They would shout in terror saying “We know you Jesus of Nazareth. You are the Holy One of God”. He will silence them and then expel them from their victims.

Jesus did not just came out, he also came in when he entered Jerusalem. And he did not only came in, he came running and chasing with a whip and cord the business men and money changers inside the temple complex.

Jesus did not only came out, but he allowed people to come out and be freed from their bondage. After all that’s what coming out means, to be released from what is imprisoning us. He freed many lepers from the bondage, not only of their physical sickness but of the social isolation that went with it. Jesus helped men and women to come out in many ways. Best of all, in the gospel of John, he made Lazarus come out of the tomb and out of death’s hold. When Jesus came out he also stepped into the work of the salvation of many.

Truly it is scary to come out as LGBTQI. For when you come out, like Jesus, you will be called to step into the work of saving others. Such a work entails being called by many derogatory names. You will be rejected by your own family and people. People will not understand you. Your Church will condemn you for being and proclaiming who you really are as Jesus experienced.

Your many gifts and your uniqueness will be called demonic and abominable like the Nazarean who according to his detractors drove out demons by the power of Beelzebub, the prince of darkness.

Our coming out like that of Jesus is not a onetime event. It will be a series and a lifetime indeed of coming outs, crucifixions, resurrections, empty tombs and expelling demons who know our true selves as children of God. The need to continuously come out is an act of resistance and struggle against the powers of death and alienation of church and society that wish to keep queer people enslaved within dark closets, locked by their dogmas and stigmas.

Our coming out is a work of salvation and a living proclamation that saves and frees the lives of those that are still in the bondage. Sure it will be a struggle as Jesus struggled but as one whom God called and demons feared, we have the assurance that we shall empty our tombs and those of others.

MCC is a church for all, including LGBT+ people. First timers and guests are much welcome. For instructions on how to get to our chapel, click here.